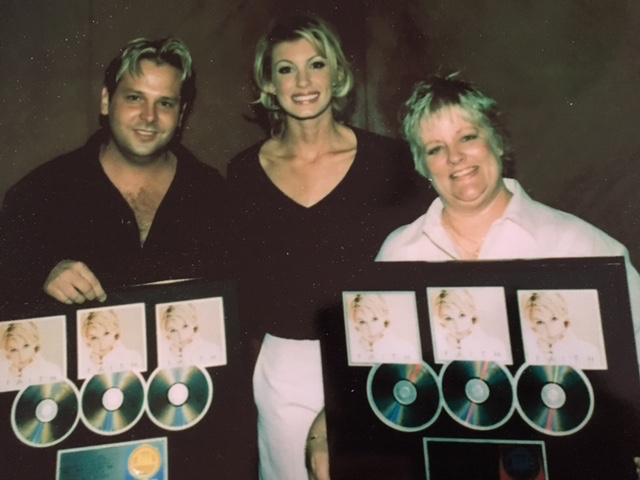 Keith Brown is my longtime friend. I’ve written many songs with him including, “The Hard Way,” recorded by Faith Hill which earned seven platinum records. In fact, the subtitle to my new ebook, Kickin’ Cancer’s Butt, AGAIN! (how to fight cancer with faith from a multiplatinum award winning songwriter who’s done it three times!) references that. So ironic.
Sunday morning, I received the news from another wonderful brother/friend, James Sigmon, that Keith had died. My heart was shattered in a million pieces. I had emailed him only three days before. My mind couldn’t comprehend that he was gone.

My drive home from Florida was filled with Cheryl Rogers’ Hymns record and memories of Keith- all of the times we stayed at James’ house in Nashville and wrote songs all day and night in our PJ’s, the times we would see three movies in a row for a brain break, times we laughed until we cried, and times when we would discuss hard topics and wrestle with our opposing views.

I remember the night we got our triple platinum record and had our picture taken with Faith Hill. We were both so excited that we felt like we would not make it back to the car without bursting at the seams. You see not a lot of writers ever earn a platinum record. But, we managed to maintain our cool until we placed our prizes in his back seat, got into the front seat and closed the car doors. We exhaled, looked at each other and then both let out the highest pitched squeal you can imagine. Then, we laughed until tears ran down our faces. It was such a happy and celebratory night!

After we composed ourselves we went to Mario’s, one of the best Italian restaurants in Nashville and treated ourselves to a beautiful dinner. We closed down the restaurant. It was such a special evening and we milked it to the max. Finally, our horse-drawn coach turned back into a pumpkin… we went back to Keith’s new one bedroom apartment where I slept on his mattress on the floor of the bedroom amidst unpacked boxes and he crashed on the couch. Still, we felt like songwriting royalty, even if it was just for a night!;-)

Keith got his first writing deal when he was only seventeen. He had writing and recording deals most all of his life. He wrote like a machine, with precision and brilliance. I’m certain that he was a genius. He was an interesting diacodemy of innocence and depth, the true sign of a creative soul. And he struggled. He struggled with injustice, intolerance, and all of the unfair and jagged edges in the world.

And then, on one Saturday night in October he found himself in a dark place, alone… and he forgot. He forgot that God loved him and was right there with him. He forgot that he had friends who love him that he could call on 24/7. He forgot that troubles only come to pass and that tomorrow would be a new day.

And, in that one split second when he forgot he made a decision from which there is no turning back. I wish so much that he hadn’t forgot. I will never forget him. I love you, Keith Brown. I will miss you every day. Rest in the arms of Jesus. Big hugs, D #faithhill